This document provides tips on what you can do with the Mobage ngCore SDK (hereafter ngCore).This includes methods of incentive provision and event operation etc.

By calling Social.Common.Service.openFriendPicker(),WebView (refer to the left screenshot below) will be displayed. The following screenshots are diagram showing the process for acquiring UserId by using the Listener set in invitedUserEmitter.

For acquiring the invited UserId, you need to implement invitedUserEmitter before calling openFriendPicker. Implementation example is provided below.

Methods of Incentive Provision by Invitation

Providing Incentives to All Invited Users Using the ClientAPI Only

In this case, it is not possible to know which invitation mail the invited user starts game through if multiple users send mails to the invited user. For example, User A and B have sent an invitation to user C almost simultaneously. If user C starts the application,

Methods of Event Operation in Mobage ngCore SDK for iOS

You can not perform live update in Mobage ngCore SDK for iOS. In order to update the data, you need to make a request in iTunesConnect of Apple again.

However, for the event with no resource code modification, you can update resource by placing setting resources on an external server using the secondary manifest and fire appropriate events. Detailed explanations regarding secondary manifest operation and resource update methods are given below.

Posting in the Diary

Posting from the Mobage ngCore SDK to the diary can be performed by implementing the API below.

By calling Social.JP.Service.openDiaryWriter, the following diary post screen (WebView) will be displayed.

Sending a MiniMail from the Mobage ngCore SDK can be performed by implementing the API below.

It is possible to specify MiniMail by placing the recipient, title and body of the text in an argument with Social.JP.Service.openMinimailSender. It is also possible to determine if a MiniMail was sent by using the callback argument isSent. However, users can rewrite the title and body of the text.
By calling Social.JP.Service.openMinimailSender, the following MiniMail submission screen (WebView) is displayed. 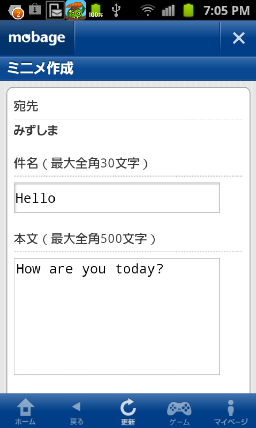 Providing guidance for posting reviews and evaluations from the Mobage ngCore SDK to the AppStore or Google Play (formerly called Android Market) can be performed by implementing the API below. (The following example is for Google Play.)

How to Upload Your Application to iTunes Connect